They can also demonetize material and restrict money flow on their own. These issues can be solved with blockchain technology. By keeping user content on a blockchain’s immutable ledger, social media ventures can avoid censorship. They can also provide users control over incentives and reputation points by encrypting the data and transferring it via unstoppable crypto transactions.

Society2, a new social media site built on the IOTA blockchain and its IOTA Streams technology, will launch soon. Using blockchain technology, users will have more control over their data and privacy and the ability to earn free IOTA tokens by watching ads. Developers can also use Society2 to create new platforms.

Society2 unveiled its goals, stating that it aims to be one of the first decentralized social media networks with broad appeal. The development team hopes to create an early prototype by Q3 2020, although no firm release date for the platform has been set. 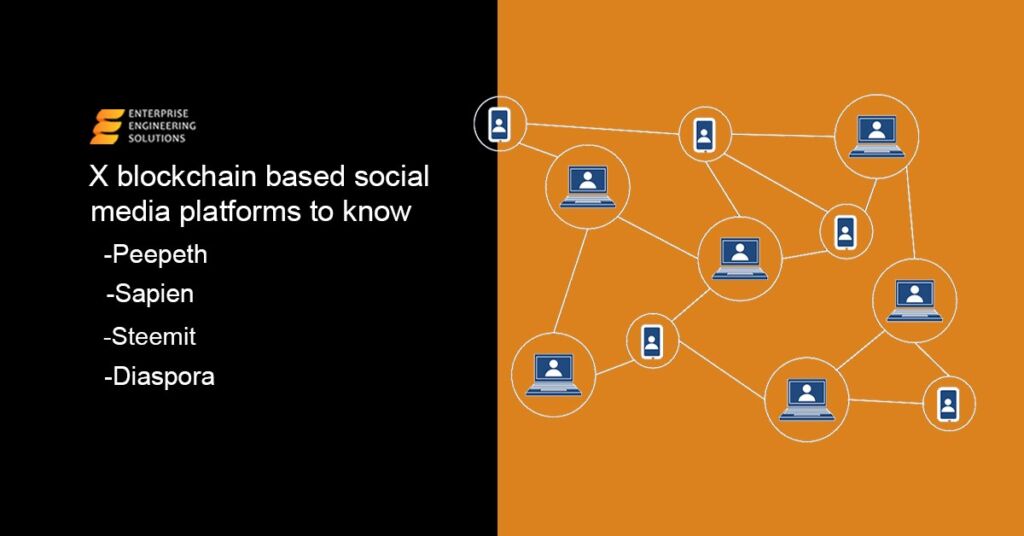 Peepeth is a microblogging platform on a decentralized social media network. It’s a Twitter clone, but don’t be fooled by its appearance. Peepeth’s monetization approach, mission, and backend technology are worlds apart from previous “free” services. It’s taking something you’ve gotten accustomed to and know how to use – and making it available to the rest of the world.

Peepeth is based on the Ethereum network, and like all dApps, it takes a modest amount of Ether to participate. That is, it is not “free” and does not conceal expenses from users. Using Peepeth costs the equivalent of a few American cents for an entire day of everyday interactions.

This platform, created by Bevan Barton, was released on March 27, 2018. Peepeth is an open-source smart contract with a frontend that can be accessed at Peepeth.com.

Some of the critical features of  Peepeth includes:

Users can stake SPN tokens in Sapien’s engine and get tokenized rewards for making comments, voting on posts, and generating content. On this decentralized social network, users have complete control over their time and data.

Based on involvement and ‘upvotes’ on content, the steem system automatically distributes Smart Media Tokens to the producer (SMT). Users on this platform have earned over $59 million for their material, according to Steem Stats. Furthermore, the Steemit whitepaper predicted a whopping 6 million transactions per second, far higher than Bitcoin and Ethereum’s current TPS. Writers and content providers who wish to monetize their work should use Steemit. In February 2020, Tron purchased Steemit.

Diaspora is a distributed social network that users for users run. It comprises a collection of self-contained nodes (known as pods) that build a network. Because a single person or company does not own a social network, it is immune to corporate takeovers and advertising. “Our distributed design guarantees no big corporation will ever control Diaspora,” the project’s creator claims.

Diaspora is a distributed social network that users for users run. It comprises a collection of self-contained nodes (known as pods) that build a network. Because a single person or company does not own a social network, it is immune to corporate takeovers and advertising. “Our distributed design guarantees no big corporation will ever control Diaspora,” the project’s creator claims. Furthermore, individuals of the Diaspora’s “community,” as they refer to it, can follow hashtags in the same way on regular social media sites.

Diaspora is built on three critical factors in terms of functionality and structure.

The Diaspora network is based on dispersed servers that are owned and operated separately. It guarantees that the system is entirely decentralized, with no data being held on a single server.

Users do not need to divulge their genuine identity to participate in the Diaspora community. The user might also choose to reveal personal information such as their phone number. Apart from being free to use, the software gives users complete control over how they connect.

A unique Diaspora feature called ‘Aspect’ allows users to have complete control over their data and distribute it at their choice. Furthermore, users do not sign off their data rights, either to Diaspora or to any other third party, when they sign up for the community.

On the one hand, traditional social media’s popularity is skyrocketing due to the enhanced marketing and entertainment opportunities it provides to its users. On the other side, concerns about data and privacy breaches linked to these sites are growing.

The blockchain-based application puts the interests of the users ahead of the corporation. In the not-too-distant future, people will be able to operate these applications. We hope you have gotten an idea about the best blockchain-based social media platforms now.

Furthermore, because there is no centralized authority, users on these networks have more privacy. As a result, the freedom of speech and expression is preserved. People are spared the agony of being persecuted for their opinions on social media. Users can earn cryptocurrency by posting and interacting on most decentralized social networking platforms.

About the Author: EES

You can find out more about which cookies we are using or switch them off in settings.

This website uses cookies so that we can provide you with the best user experience possible. Cookie information is stored in your browser and performs functions such as recognising you when you return to our website and helping our team to understand which sections of the website you find most interesting and useful.

Strictly Necessary Cookie should be enabled at all times so that we can save your preferences for cookie settings.

If you disable this cookie, we will not be able to save your preferences. This means that every time you visit this website you will need to enable or disable cookies again.